Add to Lightbox
Image 1 of 1
BN_JohnThomasVC05.jpg 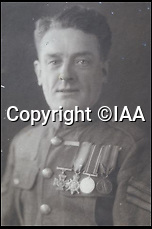 A hero soldier who won the Victoria Cross in the First World War contemplated desertion after becoming sick of the hell and horror of the Western Front, a recently discovered letter reveals.

Lance Corporal John Thomas wrote a dispirited letter home to his brother and sister months after displaying incredible bravery that won him the highest military decoration for valour.

The 31-year-old told his siblings they had no idea of the terrible things the men endured in the trenches and how he considered walking off towards the German lines and be taken prisoner just so the war would be over for him.