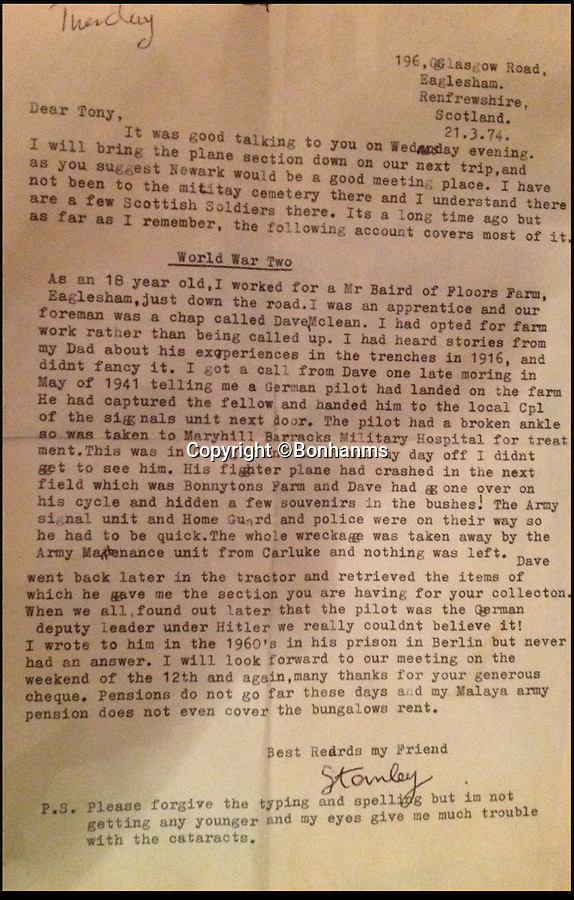 Letter of provenance from Stanley Boyd.

Wreckage from a German fighter plane flown to Britain by Hitler's right hand man in a bizarre attempt to broker a peace deal in 1941 has emerged for sale for £3,000.

The section of fuselage was salvaged from a farmer's field where the Messerschmitt plane, piloted by Nazi party deputy Rudolf Hess, had crashed.

The Deputy Fuhrer had flown alone from Germany to Britain on May 10 1941 in the hope of bringing Britain to the negotiating table for secret peace talks.

When he got dangerously low on fuel he bailed out, parachuting into a field at Floors Farm in Eaglesham, just south of Glasgow, while his plane crashed in the neighbouring field.

Dave McLean, the foreman at Floors Farm, quickly captured Hess, who identified himself as Captain Albert Horn and had suffered a broken ankle while landing.

After handing him over to the police, Mr McLean cycled to the crash site and, knowing the plane would soon be recovered, hid several parts from the wreckage in nearby bushes.

He retrieved them later using a tractor and gave a section of the plane's fuselage to 18-year-old farm hand Stanley Boyd as a souvenir.

Mr Boyd sold the fuselage in the 1960s to the former assistant secretary Battle of Britain Association, who then passed it to The War Museum.